How to debug angular protractor tests in WebStorm

There is a way to run and debug protractor web-tests in WebStorm. I just want to share this answer here

I was experiencing the same problems described by comments to S.Panfilov's answer, i.e., running protractor in WebStorm worked fine, but the debugging process got stuck somewhere.

The problem is solved in version 0.22.

on the left you can see tests folder structure

Worked for me. It was looking for the protractor.conf.js in the wrong folder. Had to look up a couple dirs.

Like some of the other responses here, I found that I could run in release but couldn't run in Debug and it would just hang at some point. I found that I had the conf file set to target two browsers and it seems that this was too much for the debugger and it would hang without any more info. Targeting only a single browser fixed this issue for me.

It works! Here are my settings 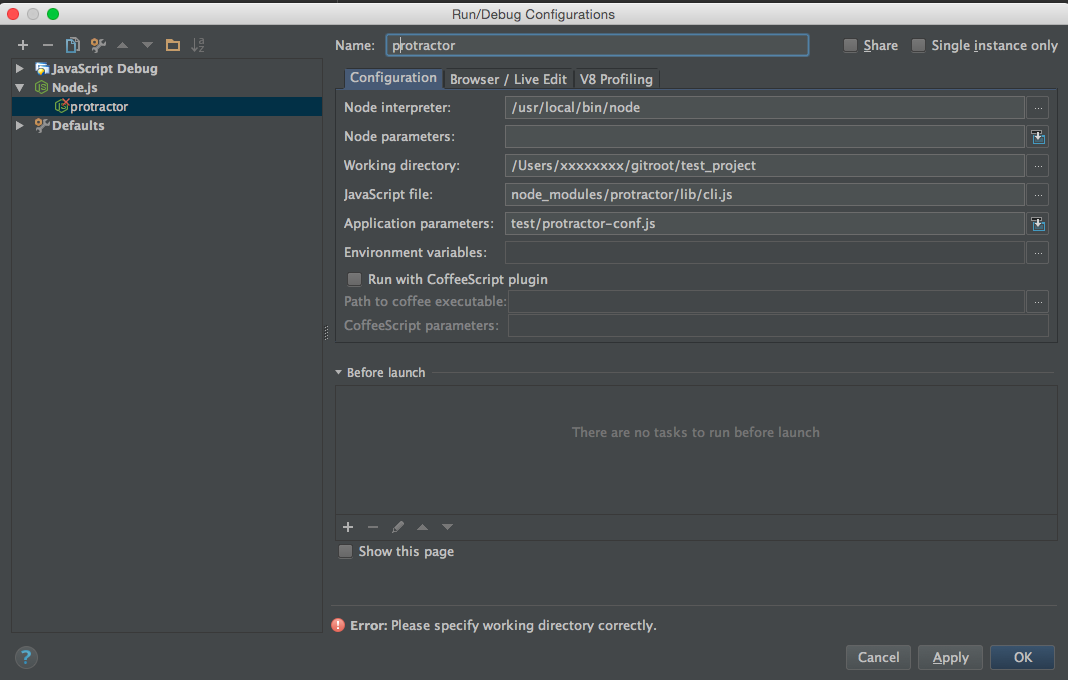 This recipe can be found in it's original form on Stack Over Flow.

Node.js Recipes are structured in a Cookbook format featuring recipes that contain problem statements and solutions. A detailed explanation follows each problem statement of the recipe. This is usually contained within the solution; however, an optional discussion section can often contain other useful information helping to demonstrate how the solution works.

Node.js® is built on Chrome's V8 JavaScript Engine. Node.js is designed to build and execute applications using an event-driven, non-blocking Input/Output model attempting to make it lightweight and efficient. Node.js contains one of the largest open source package ecosystem using npm to create, install, and manage a variety of useful JavaScript packages that can easily be embedded into any Node application.

If you are completely lost and don't know even where to begin, I would suggest by visiting the Installing Node.js page where you can download and install the latest version for your operating system of choice.